American painter, illustrator, and sculptor
American, (1901–1973)
Born Philip Blashki in New York City, but was raised and educated in England. He returned to New York in the 1930s and worked as a muralist for the WPA (1934-1938). He was considered a social realist painter and he was politically active, his works often based on social themes. Later in his career, his work became less political and based more on fantasy and dreams. 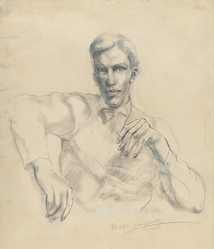