American photographer
American, (1874–1940)
Born 1874 in Oshkosh, Wisconsin, Lewis W. Hine is widely recognized as the outstanding exponent of social documentary photography in America. He began taking photographs in 1904, and soon realized that the camera was in important instrument for teaching, as well as recording social conditions in America's inner city. He taught at a photographic club in 1905 and was later joined by Paul Strand. He worked for the National Child Labor Committee from 1906 to 1917, photographing children working in coalmines and factories. He traveled extensively throughout the United States documenting the social conditions of children and giving lectures on behalf of the National Child Labor Committee. He joined the Red Cross in 1918, which sent him to France. Upon his return to New York in 1919, he changed his straightforward objective style to a more interpretive approach, advertising his work as "Lewis Wickes Hine, Interpretive Photography." In 1930, Hine was given the task of photographing the construction of the Empire State Building. His images of workers on scaffolds high above the city streets are among his most famous. He died in 1940 at Hastings-on-Hudson, New York.

Exhibit Panel: Why This Double Standard? 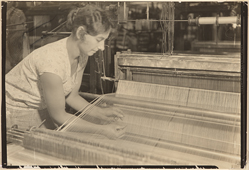 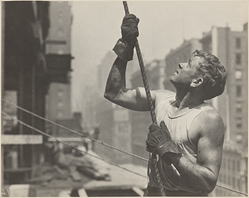