American painter, sculptor, and printmaker
American, b. born 1930
American artist who was one of the leaders of the Pop Art movement of the late 1950s and early 1960s. He is best known for his images of targets, flags, maps, and other instantly recognizable subjects. Although he attended the University of South Carolina for over a year and later briefly attended an art school in New York, Johns is largely considered a self-taught artist. 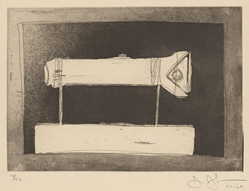 Untitled (progressive proof one of eight)