American photographer, born Luxembourg
American, (1879–1973)
Steichen was born on March 27, 1879 in Luxembourg and grew up in Hancock, Michigan when his family emigrated to the United States in 1881. Steichen was apprenticed to a Milwaukee, Wisconsin lithographer from 1894-1898. His interest in photography began in 1895, and during subsequent years, he exhibited in various photographic exhibitions in the United States and Europe. His early style reflects his training as a painter, using soft tonality and lighting on his subjects. In 1900, Steichen became a naturalized American citizen, and in 1901 he was elected a member of the Linked Ring, a pictorialist society in London, England, United Kingdom. In 1902, Steichen was a founding member of the Photo-Secession Movement, along with Alfred Stieglitz. In 1905, Steichen and Stieglitz opened the Little Galleries of the Photo-Secession "291" on Fifth Avenue in New York City, New York. From 1906 to 1914, Steichen was working as a freelance painter and photographer in Paris, France, but returned to the United States on the eve of World War I with the desire to become a photojournalist in the tradition of Matthew Brady. From 1914 to 1919, Steichen was an aerial reconnaissance photographer and director of photographic services for the United States Air Force. In 1920 Steichen abandoned painting completely for photography and from 1923 to 1938, Steichen had a studio in New York City, New York. He also worked as the chief photographer for Vogue magazine, creating such iconic fashion images as his portrait of Gloria Swanson behind a black lace veil. He became a Lieutenant Commander in United States Navy in 1942 and he organized the War Photography Department. From 1945 to 1946, Steichen was the director of the Naval Photographic Institute organizing two exhibitions for MOMA: "Road to Victory" (1942), a photographic portrait of The United States on which he collaborated with his brother-in-law, poet Carl Sandburg, and "Power In The Pacific"(1945). Steichen abandoned his own photography practice in 1947 to become the director of the photography department at the Museum of Modern Art, New York City, New York. He held this position until 1962. He died on March 25, 1973. 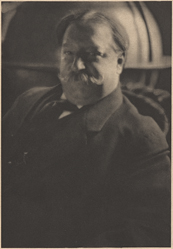 Isadora Duncan at the Portal of the Parthenon 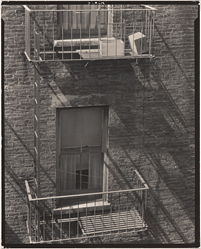