American photographer
American, b. born 1935
Philip Trager is an important contemporary photographer of architecture and dance. The Library of Congress, which cooperated with the National Building Museum to present a retrospective exhibition in 2009-2010 of Tragerâs work, has acquired a definitive collection of his photographs and will house his archives. The Davison Art Center at Wesleyan University also holds a definitive collection of Trager's photographs and presented a major retrospective exhibition in 2006. Trager's work is held in many other collections including those of the Museum of Modern Art, Metropolitan Museum of Art, Brooklyn Museum, Philadelphia Museum of Art, Center for Creative Photography, MusÃ©e Carnavalet, BibliothÃ¨que Nationale (Paris), and New York Public Library, which mounted a major exhibition in 2012-2013. His ten monographs, regarded as modern albums, have received critical acclaim and awards including Finalist for the Grand Prix Award of Les Recontres Internationales de la Photographie, Book of the Year of the American Institute of Graphic Arts, and inclusion in the Best Books selections of Interview, Vanity Fair, The Times (London), New York Magazine, Los Angeles Times Book Review, and others; four have been Editorsâ Choice selections of The New York Times Annual Review of Books. The major retrospective catalogue of the artistâs work, titled Philip Trager, was co-published in 2006 by Steidl (GÃ¶ttingen, Germany), the Davison Art Center, Wesleyan University, and the Allen Memorial Art Museum, Oberlin College. Among his other books are Echoes of Silence, Philip Trager: New York, Photographs of Architecture, Wesleyan Photographs, The Villas of Palladio, Changing Paris, Dancers, Persephone, and Faces. [DAC biography, not from ULAN]

Andrus Field: From above, Fayerweather Gymnasium in Background

Andrus Field: From above, toward Mount Vernon Street

Bryant Park, Forty-Second Street and Avenue of the Americas

Cathedral of St. John the Divine

Center for the Arts

Center for the Arts: Steps to North Field between North Studio and Cinema

Center for the Arts: Studio Courtyard

Center for the Arts: Tree Trunk and South Studio

Columbus Circle, Intersection of Eighth Avenue and Broadway, Looking toward the Maine Memorial and the New York Coliseum

Columbus Circle, Intersection of Eighth Avenue and Broadway, Looking toward the Maine Memorial and the New York Coliseum 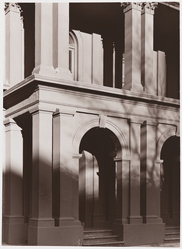 Denison Terrace: Detail of Flagpole Base

Eiko and Koma at Jacobâs Pillow I 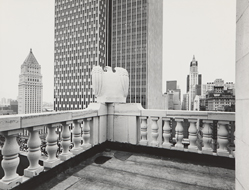 From the Chrysler Building

From the Empire State Building

From the Empire State Building

From the Equitable Building, 120 Broadway

From the Equitable Building, 120 Broadway

From the Equitable Building, 120 Broadway, Looking toward the World Trade Center

From the International Center of Photography Roof 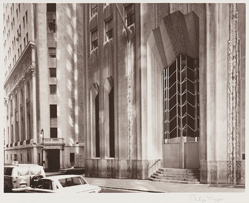 Kazuo Ohno on the Grass 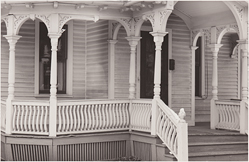 Untitled [from the Empire State Building]

Yves Musard and the Va Dancers