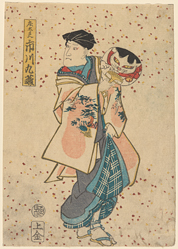 Your search criteria: Objects is "Ichikawa Kyuzo Playing the Role of Shodayu".