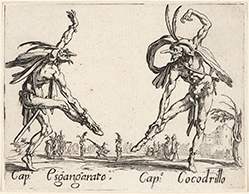 Your search criteria: Objects is "Cap. Espangarata and Cap. Cocodrillo".