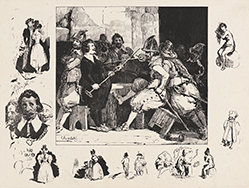 Fighting 17th CenturyâSoldiers in a Tavern