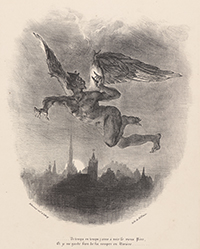 Your search criteria: Objects is "Mephistopheles in the Air (MÃ©phistophÃ©lÃ¨s dans les airs)".