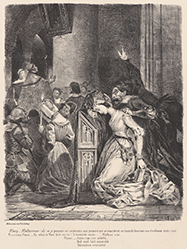 Your search criteria: Objects is "Marguerite at the Church (Marguerite Ã  lâÃ©glise)".