The Arms of the Empire and Nuremberg 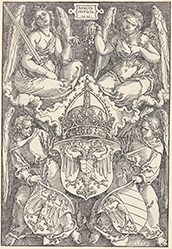 The Arms of the Empire and Nuremberg


Object Type: print
Medium and Support: Woodcut
State: First or second state
Bibliography: Bartsch 162; Joseph Meder 285 i or ii.
Credit Line: Purchase funds, 1957
Accession Number: 1957.11.4
Keywords Click a term to view the records with the same keyword
This object has the following keywords:
coats of arms*, heraldry*
Portfolio List Click a portfolio name to view all the objects in that portfolio
This object is a member of the following portfolios:

DÃ¼rer - All DAC Holdings with Images

Your search criteria: Objects is "The Arms of the Empire and Nuremberg".