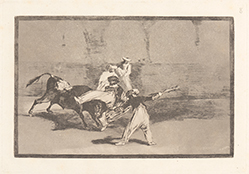 Your search criteria: Objects is "A Moor Caught by the Bull in the Ring (Cogida de un Moro Estando en la Plaza)".