Showing 8 of 8
Print this page 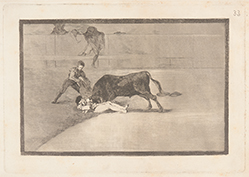 Your search criteria: Keyword is "GXGF" and [Objects]Display Artist is "Francisco de Goya".