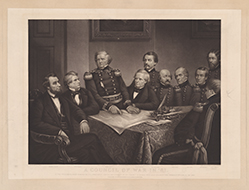 Your search criteria: Objects is "A Council of War in â61".