Showing 2 of 12
Print this page 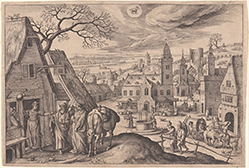 Capricornus (Goat)âMary and Joseph on the way to Bethlehem