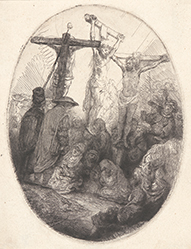 Christ Crucified between the Two Thieves: An Oval Plate

Showing 18 of 51
View current selection of records as:
LIDO XML