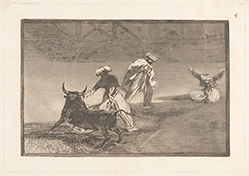 Your search criteria: Objects is "They Play Another with the Cape in an Enclosure (Capean Otro Encerrado)".