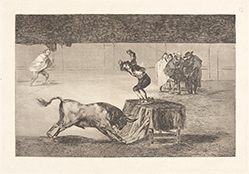 Your search criteria: Objects is "Another Madness of His in the Same Ring (Otra Locura Suya en la Misma Plaza)".