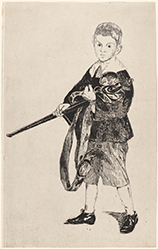 Your search criteria: Objects is "Child with a Sword Turned to the Left (LâEnfant a lâÃpÃ©e tournÃ©e Ã  gauche)".