Showing 9 of 24
Print this page 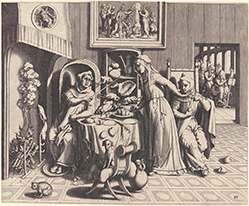 The Amorous Nun between the Abbot and the Monk