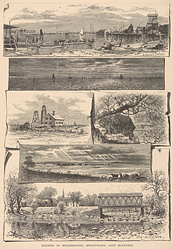 Scenes in Bridgeport, Stratford, and Milford