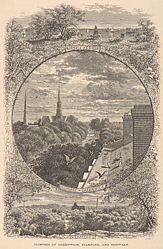 Glimpses of Greenwich, Stamford, and Norwalk