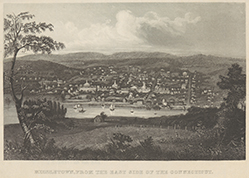 Middletown, from the East Side of the Connecticut

Your search criteria: Keyword is "DUNB" and [Objects]Display Artist is "Anonymous".

Showing 19 of 20
View current selection of records as:
LIDO XML