Showing 3 of 7
Print this page 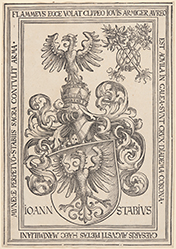 
Object Type: print
Medium and Support: Woodcut
Edition: There are two Stabius coats of arms of which this is the earlier. Meder attributes this one (Bartsch 165) to the DÃ¼rer school work (Springinklee os Wolf Traut). The drawing for the other is in the British Museum, and the wood blocks for both are in the Albertina. This block was cut from 1512â1517 but the earliest impressions known from it are those taken by Gabriel Pesthenus, Vienna 1538.
Provenance / Collectors' Marks: Pope Benedict XIV, 1740â1758
Bibliography: Bartsch 165 (vol. 7, p. 120); Joseph Meder 292.
Credit Line: Gift of George W. Davison (BA Wesleyan 1892), 1937
Accession Number: 1937.D1.72
Keywords Click a term to view the records with the same keyword
This object has the following keywords:
coats of arms*, heraldry*
DAC Downloadable Open Access Image