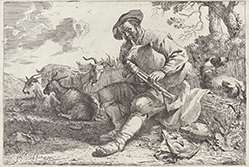 The Shepherd with the Bagpipe (Le Berger)

Your search criteria: Keyword is "GXAX:GXBE:GXMY" and [Objects]Display Artist is "Jan Miel".