Showing 2 of 15
Print this page 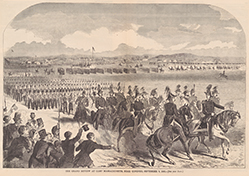 The Grand Review at Camp Massachusetts, near Concord, September 9, 1859

Your search criteria: Keyword is "GXHI" and [Objects]Display Artist is "Winslow Homer".