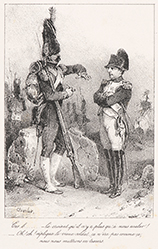 NapolÃ©on and the Old Soldier