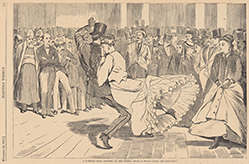 A Parisian BallâDancing at the Casino

Your search criteria: Keyword is "GYDM" and [Objects]Display Artist is "Winslow Homer".