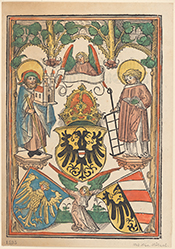 
Object Type: print
Medium and Support: Woodcut with hand coloring
Edition: Printed by Anton Koberger, Nuremberg.
Marks: Watermark: Schlangenstab (not in Briquet)
Provenance / Collectors' Marks: Frederick Werther, Baltimore (No. 1535)
Bibliography: S. 5051; H. 13716; Hind, vol. 2, p. 378. âNUREMBERG. âReformacion der Kayserlichen Stat Nuremberg.â With a large colored woodcut of the arms of the Holy Roman Empire and of Nuremberg, and its Patron Saints Laurence and Sebaldus. Folio. Fine contemporary Nuremberg binding in blind-stamped brown calf over wooden boards. The Prince Liechtenstein Copy. Nuremberg, âHieronymous HÃ¶ltzel, June 2, 1503â Later edition, cat. 1535. AD 1: âThe laws and statutes of the city of Nuremberg in a new edition superseding that of 1484 (which later was twice printed in Augsburg, in 1488 and 1498). It is possible that this new edition was planned to be issued already in 1502. The binder of the present copy used a discarded leaf with the text of folio CXX, but with a different colophon as endpaper inside the front cover, on which the date is June 3, 1502. / The woodcut frontispiece with the arms of the Holy Roman Empire and of Nuremberg is the work of an unidentified Nuremberg master in a free version of the woodcut designed by Wohlgemuth for the first edition of the law code (see Muther, Deutsch Bucher Illustration, 1162).â âPanzer, Annalen, vol. 1, p. 262, no. 539; Graesse, vol. 6, 60.
Credit Line: Purchase funds, 1965
Accession Number: 1965.1.4
Keywords Click a term to view the records with the same keyword
This object has the following keywords:
coats of arms*, religious art*, saints*
DAC Downloadable Open Access Image