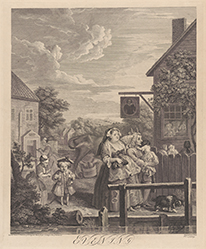 Hogarth - The Four Times of the Day

Your search criteria: Objects is "Evening".