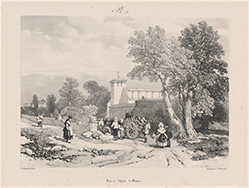 Your search criteria: Objects is "View of the Church of Mazac (Vue de LâEglise de Mazac)".